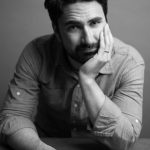 While Sylvain started off as a fishmonger, he then trained as a physicist at the leading French engineering school Ecole Polytechnique. After his one year military training and a six-month internship as a prison guard, he did some research at Harvard University and at the University of Cambridge. He then worked as a management consultant for CAC40 companies for two years before deciding life was too short to waste it doing what you hate. He explored the TV and movie industry, trying various positions from first assistant to set photographer in the US, while honing his skills as a writer, his true passion. He studied screenwriting for series at La Femis, and has now written on multiple French TV shows such as Balthazar (season 3 and 4), La chance de ta vie (RTS). In his writing, Sylvain aims at delivering a highly entertaining content while exploring deeper human questions, ranging from social, political issues to more intimate matters such as familial dynamics. For instance’ Pharma’, an 8x1h thriller / drama series he’s currently developing, explores the question of corruption inside a powerful family at the head of one of the biggest French pharmaceutical companies. Entertainment and meaning are key to Sylvain’s work. His favorite genres are the drama and the thriller (‘Pharma’, ‘Lost River’ , ‘Haunted’, ‘Gone for good’) – but he also loves to explore other genres (cop shows, horror, action, comedy,…). He  is currently co-creating with Franck Gastambide and leading the writing of ‘The Cage’ , a drama/competition series 6×45′ for a platform, co-creating with Eugénie Dard and Elsa Vasseur the 6×52′ thriller series ‘Lost river’ for TF1, and adapting Camilla Lackberg’s novels into a series for a leading French broadcaster and a platform.

6 months internship as a prison guard, part of military training (ended up doing 20 days in military days myself)